During Kwibuka 23 in The Hague, Christine Safari gives a testimony on the calvary she went through in 1994 and before

Christine Safari is a mother of 3. Her first born, Yannick, was born in 1994. Christine is married with Leon a Dutch man and in 1994 they were living in Rwanda. Before the Genocide broke, like other Tutsis, Christine Safari’s family was persecuted almost all their life. Born in Rwamagana District, Christine and her siblings struggled to get education and the work they deserved because they were Tutsis.  She had to flee and go to enroll in a secondary school in a neighboring country Burundi where her ethnicity could allow her to school. At one time, Christine worked in a hotel. She and her colleagues visited a friend who happened to be a policewoman attached to the President’s office. This visit to the state house almost cost Christine’s life because she was summoned several times by security agencies to go and be interrogated as to why she came to spy the Presidents’ office to the benefit of the Inkotanyi. She was arrested and tortured but miraculously released.

When the Genocide broke though she was already married with a Dutch husband she was nearly killed.  Her evacuation journey is a Calvary. Together with her man they joined a convoy which was to evacuate all Europeans then living in Rwanda. The convoy took Kigali-Butare-Akanyaru to Burundi route. At several occasions, militia men manning roadblocks asked her and many other Rwandans married with Europeans to get off the convoy and be killed. “We were asked to show our marriage certificates and those who didn’t have them were separated with their spouses and killed on the spot. With my eyes I saw many ladies being separated with their European husbands”. At times Christine’s husband had to pay money to militias so that they can allow them to continue together. “Some of the roadblocks were manned by French soldiers who asked us to show our ID cards”. When the convoy reached Butare city, it stationed a bit. Her brother Christian who lived there tried to join the convoy so that may be he could be evacuated as well since he had a European brother in law. His attempt was dismissed and for Christine leaving her brother there was like powerlessly abandoning him to death. Though she wasn’t sure she would survive herself but leaving her brother Christian behind was so painful that she even wanted to quit the convoy, stay and just die with him, period.

“When my husband Leon had no more money left to pay them we decided I would hide in the car’s trunk. This wasn’t easy at all because I was pregnant. By the time we reached the border with Burundi my pregnancy was already threatening. They drove me to Bujumbura in an ambulance and later evacuated me to the Netherlands. I later on gave birth naturally. God blessed me with a handsome son, Yannick and he is now 23 years old. Thank God, my brother Christian also survived and he is now married and has a beautiful family”.

Christine is now a happy mother. Beside Yannick she has two more children. Once in the Netherlands, she studied and has a job now. In concluding her testimony, Christine underlines that survivors have three duties: to remember and pay tribute to those who perished, to fight for justice but also a duty for a better future. In justice she believes we shouldn’t keep quiet when deniers try to minimize the genocide against the Tutsis. In building a better future she believes survivors shouldn’t be desperate and think their life has ended. They have to work hard and prepare a better future for new generations. 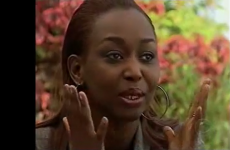